No Rest for the Wicked...or the Weary

If I were a housing loan, I'd be underwater at the moment.  I have too much to do and not enough hours in the day and night to do it all.

Now some is work, as in stuff that will bring in money to pay the bills, but other parts of it are leftovers from mother's death as well as just an accumulation of things that I had been waiting on...and which all came about RIGHT NOW.  Some I have been waiting on for more than a year and all of a sudden, they have to be done RIGHT NOW!!!

Now I know all about prioritizing and making lists with the most important things first etc. etc. (Cue the King from the King and I about now.."Etcetera, Etcetera.) But everything and everyone on the list firmly believes that his or her project/demand/need is the number one and I need to do it RIGHT NOW.

I have been, literally, working for 12 to 14 hours straight and the moment I get one thing crossed off, the next one surges to the top like a maniacal rabid rat.

Which brings me to the point of this entry.  When I do get something crossed off the list, instead of being able to take the time to celebrate the accomplishment, I feel the need to move immediately to the next thing on the list.

I wonder if any of you feel the same way?  That the only function of the "to do" list is to show what you have to do RIGHT NOW!

Can you tell I'm getting tired?  I keep hoping that maybe, through some miracle, I might actually get caught up and can...rest?

Posted by Woodeene at 7:28 PM No comments:

Email ThisBlogThis!Share to TwitterShare to FacebookShare to Pinterest
Labels: rest, tired, to do, too much to do, work

On my way out of Trader Joe's with my Kashi Go Lean and fresh peaches,

I was stopped by a young boy who said he was doing a school project and would I help. I said, "Sure," and his dad filmed us as the boy asked," What are three words you would use to describe God?"

No time to ponder.  Just answer.


I asked him if he knew what the words meant and he said he did.  I just smiled and thought, "Well, maybe you do.  And maybe you don't."

Because, despite their being the first words that sprang to mind when I was asked to describe my vision of God,  I'm not entirely sure what I mean by them myself.

Oh, I know the definitions.  What I'm not sure is why those three words sprang off my lips in 15 seconds.

The first was ineffable, too great to be expressed, too sacred to be uttered.
Yes, that is my first thought about God--a being so far beyond our comprehension that mere words cannot express the magnitude of being. God is the ineffable mystery of the universe. Now this doesn't mean that I don't think we can approach God through prayer. It just means that in the core of my being, I must truly believe that God is, above all, mystery.

The second was transcendent, beyond time, space, and limits.
For me, God is indeed transcendent.  Being raised Catholic, teething on stories of saints and miracles, how could I not have transcendence as one of the core characters of the Divine? Although I don't always see evidence of miracles, I continue to believe in them.  If I didn't, I would never pray--an experiment in answers, notwithstanding!

Finally, omniscient, all-knowing.
Although it was the last word, perhaps it lies the closest to the heart of my theology. I truly do believe that there is an all-knowing Divine that isn't just "out there," but "in here," as well. In our world, in our lives, in our beings.  Now I don't believe that we are all gods (remember ineffable and transcendent came first and the people I know, myself included, are hardly that), but I do believe that in some mysterious way, we are all united in and through the Divine; in and through God.

Catholic teaching calls it "the body of Christ" and that terminology is the one that is the most deeply rooted in my being, but however you want to express it, the reality of Donne remains:

Maybe the question wasn't so much "How would you describe God?" as it was "Who is God?" In the end, the answers would be the same.

Email ThisBlogThis!Share to TwitterShare to FacebookShare to Pinterest
Labels: describe God, Divine, Donne, God, ineffable, no man is an island, omniscient, transcendent, who is God?

My mother loved the book, "I Heard the Owl Call My Name."  So much so that I buried a copy with her. I have to admit I've never read it, but she used to tell me that she felt she would know when "the owl was calling her name," i.e. that death was approaching.

I'm not sure she did.  Maybe in the very last hour or so before her death when I wasn't with her, but prior to that, I don't know that she heard the owl call. She certainly never mentioned it.

Wondering about that got me thinking about premonitions.  I don't know that I have had any.  At least not as in some foreknowledge of something bad happening.  Or good for that matter. 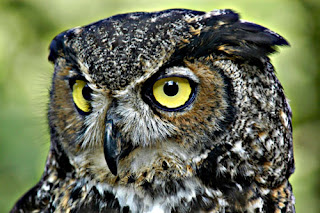 But lately I've been having the sense that "things are about to change."  I don't know what that means. I don't know if it's a premonition or lack of sleep or griefwalking or hormonal imbalance or....But I keep having the feeling that I'm on the brink of something.  I feel both on edge and on the edge. Like I'm on the cusp?

It's a very odd feeling.  Not excited like a kid at Christmas feeling. Not dread-fillled like waiting for a diagnosis that you already know is going to be bad feeling.  Just sort of...brinky, edgy, cuspy feeling.

I would dismiss it as the fruit of an overactive imagination and an overtired body and mind, but it's not that easy to shake. And it's been with me for some time now.  Several weeks, as a matter of fact, along with the verse from Scripture that says a thousand years are like a day to the Lord and a day like a thousand years.

I know God's time and my time aren't the same.  Many years ago, in a difficult time, I prayed and know I heard God say in the stillness of my being, "The answer will come soon."  I thought "soon" as in tomorrow, but it was another year before that prayer was answered. Later, I realized then that "soon" meant "soon enough."  It was "soon enough."  It was before disaster totally took over, but it wasn't exactly what I thought of as "soon."

So I'm not really sure if this feeling is a harbinger of something imminent, or something "soon," or something distant, for that matter. All I know is that it's an odd feeling...and it might be a premonition.

Posted by Woodeene at 9:20 PM No comments:

Sunday Gratitude on Monday and Answers to Prayer

I have been neglectful of the blog this past week. I could offer reasons, but they are merely excuses.

So here's Sunday's Gratitude on Monday:
1.  Blueberries.  A friend let me pick a gallon-sack-full of her luscious berries. Big and blue!
2.  Sunshine.  Here in Oregon, it's always important to acknowledge the sun.
3. I've been dealing with some health issues and I think some positive progress is being made.
4. I had a skin "spot" removed and it was taken care of before it developed into something.

5. I put out a bird feeder and while the squirrel spotted it, he didn't figure out how to get to it. He will eventually I'm sure, but for n11ow it's Me 1, Squirrel 0.

Yes, I realize that doesn't add up to 19.  That's because a couple of the yes answers could be either a "yes" or "no" depending.

For instance, the skin spot.  I had prayed that it would be "nothing."  It was a "something," but it was found early and removed. So it that a yes or no answer?

Another one had to do with some direction in life. I wasn't really clear in my prayer...asking merely to know what to do.  I had a definite preference, however.  If I had prayed for that, the answer would be "no."  But since a door was slammed shut and bolted with about 50 padlocks, I did know what I had to do.  Not what I wanted, but I no longer had a choice.  So is that a yes or a no?

The final yes was a deadend in a road.  So I got a sort of a yes to the prayer, but it also was another stop sign. So is that a yes or a no.

You see my problem with the yeses right now.

As for the no's, they were generally very clear. No. Nada. Not at all. Not happening.

And the remainder go on as they have been since I started this project. Prayers for a future, for resolution, for restoration, for healing, for wisdom...and a couple of right now things that will either be a yes or no.

Posted by Woodeene at 4:02 PM No comments: