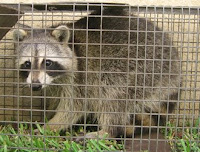 Coon Chronicles!!
I have two baby raccoons in a live trap in my back yard. We are waiting for Mama. They were living in the eaves of the roof and attacked the guys who are replacing my roof--didn't hurt the people, but the shovel took a hit.

So I had to get a pest control specialist to come and set traps. We could see Mama watching us over the fence and then, all of sudden, we spied the babies on the roof. They had come out to follow Mama and so the pest control guy reached up and grabbed the little ones. They screamed like banshees and peed all over him. Mama was quite distraught, and so was I because I know they are all doomed.

The reality is that raccoons carry distemper and so the Oregon Wildlife commission won't allow them to be relocated. Apparently distemper is a bit like the flu...there are various strains of it and the wild animals in a given area get a certain immunity to it, but if you introduce a new strain, it will be fatal. There is no way of testing the wild raccoons in an area to be sure what strain of distempter they have. If it's not the same as the strain "mine" are carrying, the new variety of distemper would infect the dogs, wolves and coyotes that live in that area and dissimate the population. Better three dead raccoons than wiping out all the coyotes, dogs, and wolves in a new area.

So the pest control people are going to shoot them. I asked how they were going to be dispatched. The choices are: a bolt to the head--which is painful, suffocation--which is slow, or being shot. My raccoons are going to be facing the fire squad. I doubt they will be given blindfolds or a last cigarette.

Unfortunately they are very cute, but I don't want them living in the attic.

UPDATE: Mama was caught. RIP Raccoons.
Posted by Woodeene at 5:51 PM No comments: