I've been recording the results of my prayers for a few months now and as July ends, here is the month's tally.

Yes--8  They range from "minor" like being able to get a certain thing done on time to moderate. Nothing big or critical received a "yes." And they included getting an answer, even if it wasn't the one I wanted.  For instance, I prayed that I be shown clear direction on a project and the door slammed so hard I barely got my fingers out intact.  Now it was something I really wanted to do, so it was disappointing, but I have to be honest and admit the prayer was for direction...and I did get that.

No--7 Just straight up NO!!! Some big things, some smaller ones.
--
Still Waiting--9  Just what it is.  Things I've been praying for that I'm still waiting on. No indication of anything.

Mixed--2 These are odd ones. Not really sure how to classify them.  For instance, let's say you prayed (and this isn't my prayer, but an example) that the front tires on the car don't need to be replaced.  You take the car in and the front tires are fine, but the back ones need replacing. So how do you classify that answer? Yes? No? Gotcha?  I'm not sure, so I consider those "answers" as "mixed."
Posted by Woodeene at 9:44 PM No comments:

It's an overcast day here in Oregon, but it's not raining...so that's the first thing on the list today.

1.  No rain! I suppose my plants might like some rain, but I'm just as glad not to have it for another day. 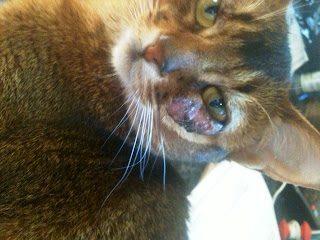 2.  Basti is healing from her burns.

3. The prayers of friends who help sustain me when there are hard things to be endured.

4.  For being invited to a waffle party!  Where waffles were served with wonderful things like avocado and bacon.  Everything is better with bacon!!!

Posted by Woodeene at 3:05 PM No comments: