Our society is so instan-oriented, I feel almost embarrassed and ashamed to admit that three months after my mother's death, I still haven't "moved on."  Well, yes, I have in some ways since the acute stage of grief is passed and I am functioning more or less.  I mean, the taxes were filed on time.  The kitty litter box is scooped regularly.  Even the dishes are done most of the time.

But a lot of things are left undone. The dining room hasn't been vacuumed in I don't know how long. There are still half-drunk bottles of soda from my mother's after-funeral gathering in the refrigerator. There is a mound of laundry on the chair in my bedroom that hasn't been put away.  There are creative projects that I haven't even thought of in three months.

I read about people who not only are back functioning 100% in this time frame, they've conquered new mountains and completely reinvented themselves. I haven't.   I feel like I'm a griefwalking laggard.

On days like today, when the sun is out I feel like I "should" be feeling more positive, more energetic, more vim-and-vigor ready to tackle life (or at least weeding the flowerbeds).  Instead, I feel a grey blanket of sadness drape over my shoulders and the tears pool just behind my lashes. It's as if I am seeing through a smudged window.  I know that there is sunlight and laughter and good times and joy out there, but I'm on the other side of the glass.

It's not just mother I grieve. It's all the other losses of life, all the other sorrows, all the other things that were not completely mourned in their season that compound the current griefwalk. I mourn decisions I made that I now regret.  People I let slip away.  Opportunities that I failed to take advantage of. Choices that I made that turned out to be less than I expected. Purchases made that didn't satisfy. Love that wasn't given...or received.

I grieve over not having had enough foresight to have planned better for this stage of life.  For not having better prepared emotionally, physically, financially, spiritually for this time.  For having been too much of a grasshopper and not enough of an ant when I knew all along this day would come.

But then, I try to stop and remind myself that living in regret over the past is no more productive than worrying myself sick about the future.  There is only today...even if it is being viewed through a smudged window.

Posted by Woodeene at 5:42 PM No comments:

I was thinking about this today, as we finally had a decently warm day here in Oregon.

A few years ago I had a sprinkler system installed in my yard. Spend money to save money, right? The real reason was that so much water was wasted when I tried to water the lawn and flower beds by running on the sidewalk or hitting the house or overspraying into the trees, I concluded that for the sake of the earth, it would be much better to have concentrated sprinklers that I could time and control in order to do my part in maintaining the balance between a decent yard and a healthy planet.

When the man who installed the system came by to show me how to program it and to do a final run-through before I needed to use it, I met him at the garage. The control box is in the garage, so I went over to open the overhead door, but he skirted around the side.

Now there is a door on the side of the garage, but in the 20 years I've lived in this house, it has never been opened.  I think, once, a long time ago, I tried it and it didn't open.  But I could just be imagining it. Imagine my surprise when the yard guy opened it. He was trying to explain the sprinkler to me and I was fixated on the door.

"Now, here's where you program the various zones."
"How did you open that door?"
"It's always been open. Now, see this button?"
"No, it hasn't always been open. Did you unnail it or something?"
"It wasn't nailed. Okay, the manual is right here and...."
"It was supposed to be nailed shut. I've never been able to open it."
"I've been using it since I started to put in the system. So, see how the different zones have different timers?"
"You just opened it?"
"Yeah. What's the big deal with the door?"
"I've lived here for years and never knew the door could open."
"Well, it does.""

All this time, I believed that the side door was nailed shut when it wasn't. I wonder how many other doors in my life I believe are nailed shut when, in fact, they are just waiting for me to try them.
Posted by Woodeene at 10:37 PM No comments:

Down for the Count

Enough said.
Posted by Woodeene at 4:57 PM No comments:

Random thoughts on my mind.

I was attempting to repair a drawer in the kitchen that came off its rails and I set it on the counter near the stove.  I apparently accidentally turned on a burner because the drawer caught fire. Fortunately the smoke alarm went off and I was able to dump the flaming drawer in the sink and extinguish the flames.  The back end of the drawer is a wee bit charred, however.  Thank goodness it didn't actually catch the whole house on fire. Deo Gratias.

The Orphanage of Life

Griefwalking is very peculiar. No one told me that I could become very anxious about all sorts of things as I take this journey. However, it does make sense, in a strange sort of way. With both parents gone, there is a strange sense of being an orphan, left alone in the world, despite the fact that I am way beyond the age one thinks of for an orphan.  A sort of existential angst at being without support or love pervades the grief, and comes at odd times and ways.  There doesn't seem to be any way out of it but to go through it.


At some point, not quite sure when, after Mother's death, I put one of her rosaries in the pocket of my jacket, where it still is. Despite the fact, I'm not a huge rosary fan (I fall asleep when I try to say it ), I find it comforting to reach in and feel the smooth beads and rough cross as I reach for my keys...which usually share the pocket. I wonder if there is any other more Catholic symbol than a rosary?

I'm convinced that when Adam and Eve ate the apple, the cat in the garden took a little lick herself.  That is the only explanation for why both cats and humans are so very very sneaky, determined and willful.  Especially when it comes to eating the leaves off the African violet.  The cats, that is, not the humans.

Two Steps Forward, One and Half Back

Grief has made re-examine that notion.

Now life is more like two steps forward, one a half back. I make what feels like progress for a few days and then I fall back again.  Not quite all the way back to the beginning, but back more than I like, more than I think I should.

I believe that eventually I will be able to look objectively at the process and perhaps even offer some sage wisdom, but right now the best I can do is observe and share the journey. One day at a time.

P.S. A friend sent me this and it seems very apropos.

I find myself on the last stretch of my journey in life, and I don’t know what is awaiting me...I know, however, that the light of God exists, that he is risen, that his light is stronger than any darkness and that God’s goodness is stronger than any evil in this world, and this helps me go forward with certainty.--Pope Benedict, on his 85th birthday 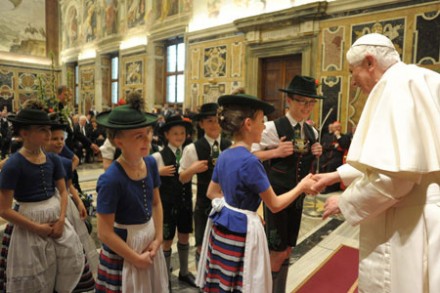 I'm not sure that  I am on the last stretch of my journey in life, although none of us knows that, regardless of our age, but I can certainly identify with Pope Benedict's feelings.

I've been reading books on how life changes after the death of a parent and the one thing they all say is that when your last parent dies, your world changes forever.  I'm certainly finding that to be true. Even though the woman who was my mother had been gone for some time before she went to the next life, her physical absence from my life has left a huge gaping hole.  She was, as the French say, "formidable!" and I always lived a bit in her shadow.  Now there is no shadow to hide me from the relentless glare.  I used to be able to measure what was coming next by what was happening with her, but now I have no idea what lies ahead, what's awaiting me.


I know, however, that the light of God exists...his light is stronger than any darkness...

In these past few months, I have been griefwalking unto God.  In ways that I have never experienced before, I have been poured out, an oblation of suffering. In my feelings of utter aloneness, the only flicker of light that I have seen has come when I catch a small glimpse of the Divine.  The light is sometimes quite faint, only a pin prick in the dark, but it has been there, a tiny star in the seemingly endless void of loss, change, sorrow, fear, panic and sadness.


this helps me go forward with certainty...

I'm not exactly going forward with certainty. More like stumbling along like I have emotional vertigo and am trying to walk along the edge of an active volcano.  But I am beginning to learn that courage and faith aren't like bank accounts.   I can't begin saving them for when I might need them. They are manna, daily bread.  I can only have enough courage, enough faith, and perhaps enough certainty for this moment. Not a day from now.  Not an hour from now.  Not even a minute from now.  Just enough for right now. Perhaps that is the only way to move forward...one moment at a time.

That's why I decided to limit my Sunday gratitude to five things. That way if I'm feeling very positive, I get the choose five. If I'm having a harder time, I only have to come up with five. Either way, it's five!

So here are this week's Gratitude Five.
1. No rain.  It's not exactly sunny out, but the rain has stopped and for that I am very grateful. I was getting extremely tired of soggy. 2. Restoration in a broken relationship. I don't know where it will go from here or if more restoration is possible, but there has been communication where there was none, civility and even a tiny bit of laughter. 3. Bach Flower Remedies.  One of these days I'll write a post about them, but for now I'll just say that Mimulus and Star of Bethlehem have been life savers more than once.

5. The Internet and WIFI . It allows me to work, connect and even blog!

Posted by Woodeene at 2:44 PM No comments: