This blog has been a bit, well, a lot dormant while I've been living "Ordinary Time." But I'm bringing it up for a very special reason....my dear friend Maria Scaperlanda has an awesome new book out--The Shepherd Who Didn't Run--the story of Fr. Stanley Rother, the martyr from Oklahoma.

Now Maria lives in Oklahoma and I've visited there--with tornados and horrible weather and blistering heat I think living there would be martrydom, but that's not what Maria is writing about. In her eloquent way, she shares the life...and death of a real, true, modern-day martyr. 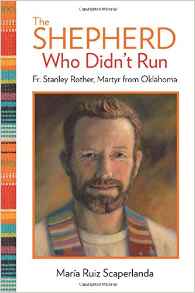 The blurb on the back says it better than I can:

"The shepherd cannot run at the first sign of danger." - Fr. Stanley Francis Rother
Fr. Stanley Rother was true to his word. He did not run. And was martyred at the age of 46.
Fr. Stanley arrived in Guatemala in 1968, and immediately identified with his parishioners' simple, farming lifestyle. He learned their languages, prepared them for the Sacraments, and cared for their needs. Fr. Stanley, or "Padre Francisco" as he was called by his beloved Tz'utujil Indians, had found his heart's calling.
After nearly a decade, the violence of the Guatemalan civil war found its way into the peaceful village. Disappearances, killings, and danger became daily occurrences, but despite this unrest Fr. Stanley remained hard at work, building a farmer's co-op, a school, a hospital, and the first Catholic radio station, used for catechesis.
In early 1981, his name was on a death list, so he returned to Oklahoma and was warned not to return. But he could not abandon his people, so he went back, and made the ultimate sacrifice for his faith.
"Pray for us that we may be a sign of the love of Christ for our people," said Fr. Stanley, "that our presence among them will fortify them to endure these sufferings in preparation for the coming of the Kingdom."

Ever since I was just able to read, I saturated myself in the stories of the martyrs. I know I could never make that ultimate sacrifice, but I am deeply and profoundly humbled by those who can.

And I'm deeply and profoundly humbled by Maria's great gift of storytelling and inspiration. Read the story of Fr. Rother---and be inspired.

Posted by Woodeene at 3:29 PM No comments: