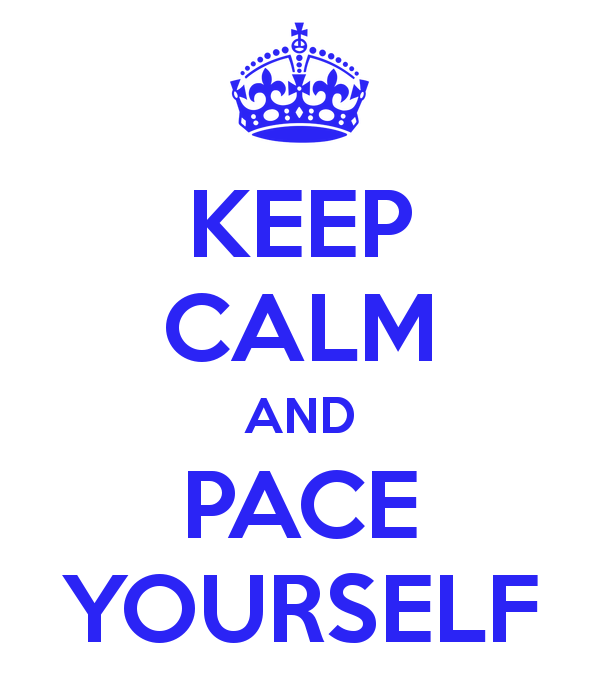 I have never wanted to admit that I might actually have fibromyalgia or chronic fatigue, even when I could barely drag myself out of bed or when my days were filled with literally crawling from one place to the next.

And if I gave up, I might as well give up on life itself.

However, for the last few weeks, I have been in an unending cycle of pain, more, pain, fatigue, more fatigue followed by yet more pain and more fatigue. I finally understood why people contemplated suicide.

So I have had to do something drastic.

I have had to pace myself.

Now I'll admit that I'm not very good at it.  I have always believed that if you start a project you see it through from beginning to end, including all the clean-up afterwards. None of this half-hearted crap. All or nothing, baby.

But that is no longer possible. Sometimes, by the time I get everything ready for a project, I'm too tired to start. And when I've done some of it, I'm too exhausted to totally clean it all up and put it away for the next time.

Which, of course, means I rarely start anything because All or Nothing!

However, I have been editing a series of unrelated books lately--unrelated except that all of them seem to have a message directly for me contained within the run-on sentences and dangling participles that I fix almost on auto-pilot.

The message hasn't been subtle: You aren't living the life you created to live.

So naturally I began praying...er whining..."How can I do what I want to do when I don't even have the energy to do what I have to do?"

The answer came back: PACE

So I've been trying to do that. Like today.  I had a burst of energy so I got out the hose and Windex Outdoor and sprayed/cleaned four windows.  I have 30 or more windows in the house, so four is like nothing.  But I did the four, felt the exhaustion swallow me, so I turned off the water, coiled the hose, left the Windex Outdoor right beside the hose and came in the house.

I wasn't very happy about not completing the entire project, but then I looked out my office window--one of the four--and realized that I could see so much more clearly that it really was worth it.

Maybe later today I'll have the energy to do four more windows.  Or maybe not.  But at least there are four that are now clean that weren't yesterday.

Not a lesson I'm enjoying but apparently the one I need to learn right now.

Anyone else learning this same lesson?