Change and Pain in the Brain

I am not tidy.
I'd like to be, but I'm tidy-challenged. Clutter enters my life at light-speed.

But I find it very difficult to get rid of things.

I have friends who say things like, "Doesn't it feel LIBERATING!!! and FREEING!! and WONDERFUL!! to get rid of all things? Don't you just LOVE the feeling of tossing out things?"

I find it difficult, painful and I often end up regretting having let go of something. Letting go hurts...and so I find it difficult to toss out things like a favorite dress that no longer fits or a card from a friend from five years ago.

Now I know why. A new study at Yale indicates that in some people the same areas of the brain that register physical pain light up when people are faced with getting rid of a possession: the anterior cingulate cortex and the insula. Which means that no, I don't feel great when I get rid of things; I experience anxiety and pain.

However, some people, with different brain chemisty, have the opposite reaction. They get a high every time they get rid of something. So they get rid of as many things as they can, as often as they can because their brain registers the activity as pure pleasure.

Now, the two really big questions are:
1. Why people who experience pain with letting go of things so often enter into relationship with people who experience pleasure from it?
2. And why do the tossers of life seem to think that they are completely and utterly morally superior to the keepers when it all is just brain chemistry?

Email ThisBlogThis!Share to TwitterShare to FacebookShare to Pinterest
Labels: brain chemistry, clutter, getting rid of clutter, pain, why it's hard to get rid of clutter

There seems to be a divide between people who find Pope Francis's style of dress and liturgy to be inspiring and those who find it distressing. The ones who are upset miss the high style and what they see as the "beauty" of the Church (which others dismiss as "smells and bells.")

I think part of the reason for the divide is what people, especially relatively new (since the middle to end of the JPII pontificate) converts expect of the Church and what those who have been around for a lifetime expect.

Maybe an illustration that came to mind as I tried to get to sleep last night will help.

Imagine an ice cream shop that has opened under new management. This shop sells many flavors of premium ice cream including a few unusual ones like lavender and  honey. People who have been coming to the shop for many years are used to changes of ownership on a fairly regular basis. So they come in, check out the new selections, and get back to their lives. People who have never been to this shop before are thrilled and return daily to see what new delights have appeared. They get so used to premium ice cream they can't imagine a time when there wouldn't be this special ice cream shop or their favorite owner. They write blogs about the wonders of the shop and bring all their friends in for samples.

One day the old owner dies and a new owner takes over the shop. The people who loved the old shop are a little nervous, but instead of premium ice cream, the new owner now serves even richer, more decadent flavors including some recipes from the past like butter pecan salted caramel with toasted nuts. The ice cream lovers are over the moon. Many line up for hours just to see what special flavor has been created. Those people who prefer plain vanilla and chocolate still come by, but they aren't enamored with the new treats. However, since they can still find vanilla and chocolate in the far back containers, they are okay with the new management. They know that there will be another new owner sooner or later.

Just when the people who recently came to love the shop are completely comfortable, reassured that they will have wonderful rich ice cream available for the rest of their lives, the new owner suddenly sells the shop. Much to the ice cream lovers' dismay, the shop now sells--gasp--frozen yogurt! No more butter pecan salted caramel with toasted nuts.  Just yogurt plus a few plain flavors of ice cream.

The new ice cream lovers are horrified. They have been betrayed. They had come to expect premium ice cream whenever they wanted it and now all they can get is frozen yogurt (and a few plain flavors of ice cream.) This is NOT what they signed up for when they started coming to the ice cream shop. It is an outrage, a travesty! They are angry, hurt and frustrated.

However, there are many people who are now coming to the shop who haven't been in years. They happily sample the yogurt. They never really liked the fancy flavors anyway. And those who always did like the plain flavors of ice cream are now very happy that they can get their scoops without having to drag out a carton from the back freezer.

As the fancy ice cream lovers mourn the loss of their favorite shop, the one they had expected to be able to go to for the rest of the lives, the new owner points out that it never really was an ice cream shop to begin with.

He shows them a sign that has been on the door since the very beginning--it's a frozen dairy product store.  Just because the recent owners had decided that meant ice cream didn't make it so. Yogurt is just as much a frozen dairy product as the most premium ice cream, the new owner explains. It has the same general ingredients, even the same calorie count (more or less) as ice cream. It meets all the requirements for the shop.

And the new owner adds that he hasn't forbidden anyone from having butter pecan salted caramel with toasted nuts; he just isn't serving it right now. After many years of focusing on customers with refined palates, the shop is now going for a the health-conscious, yogurt-preferring, plain vanilla crowd who have been hard pressed to find their preferences for many years.

The ice cream lovers may not be happy, but no one owns the shop forever, the new owner adds.  And who knows...the next owner might decide to serve gelato, he chuckles. 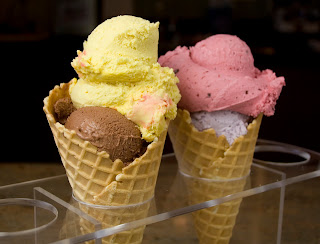