One of those areas is an unfolding miracle in my life. I've not wanted to talk about it with anyone, using "It's none of their business" as my reason. But I also know that when my faith and hope has flagged, hearing of answered prayer has bolstered me and given me courage.

So I decided to share as much of my story as I can, given that it involves another person and I cannot expose their privacy unless or until they are willing to allow me. So if some of the details are necessarily a bit vague, it's because I can't really reveal them to the world at large. (But if you truly want to know, leave your email in the comments and I'll tell you privately.)

It began shortly after my mother's death--the first anniversary of which is coming next week. I had a difficult and complicated relationship with her.  Although she had many wonderful qualities and gifts, she was also a classic narcissist. She wanted me, her only child, to devote my entire life and being to her. She wanted all my love, all the time, and the only person she was willing to share me with was my son--her grandson. Because of her controlling and demanding nature, I have a trail of broken relationships scattered through my life; people I sacrificed in order to give my mother the love and attention she so craved and demanded. At the time, I didn't realize what I was doing because, as I said, I had such a complicated relationship with my mother that I could not distinguish her wishes from my own desires. But that is another story on my life and faith journey.


One relationship in particular was utterly destroyed and lost for 15 years. No contact at all. I didn't even really know where the person was, except a sort of vague idea of the state they lived in. I had no hope of ever finding that person, much less rebuilding a relationship.

Then, one day about a month after my mother died, I was in the area of the garage where I stored her things that I needed to sort (and still do). I opened a box, filled with stacks of her papers. She wrote incessantly, copying everything from prayers to recipes to ideas that caught her fancy. She never did anything with them, but put them in stacks, which are now in boxes. I pulled out handful of papers and on the top of one was a prayer to St. Jude--and a mention of the person whose relationship had been destroyed.  Apparently, unbeknownst to me, mother had had some feelings of remorse about it all and at some point in her life had written out a prayer to St. Jude asking him to help me. (She never told me about her feelings and had I tossed out that stack of papers without reading them I would have never known.)

I knew that St. Jude was the saint of the impossible and certainly this seemed impossible. But, I prayed to him, not even quite sure what I was asking him for. However, it seemed more than mere coincidence that I should have found that particular piece of paper amid the boxes.

Over the next few weeks, I kept praying and began to try to find this person. They don't use social media, didn't have a listed phone and I really didn't even know where to begin except with their name and a possible address.  I wrote to the address, but didn't get a reply. I searched the internet and data bases with no luck until one day I stumbled onto a phone number. I called and amazingly it was the answering machine for that person! I left a message, not knowing what to except, but I continued to pray, asking St. Jude's intercession.

A few days later, there was a message on my answering machine. They had called back! I returned the call and this time we connected. We talked for several hours, about what had happened, and what part my mother had played in it all.  Since then, we have continued to talk, to rebuild our relationship and recently we met up and spent some time together in person, healing more of the deep wounds. We learned that the love we had never died, even over those long years, and while neither of us ever dreamed it would be possible for renewal, neither did we ever consider the possibility of a miracle.

I don't know where the road is leading or what will come next, but I do know that St. Jude, saint of the impossible, heard my prayer (and perhaps the prayer my mother wrote so many years earlier). It is nothing short of a miracle that a completely annihilated relationship could undergo restoration.

I've not wanted to talk about this, perhaps for fear that it will all fall apart and instead of being a miracle it will have turned out to be a heart-rending cosmic hoax. But as I stand on the cusp of the anniversary of my mother's death, I've decided that no matter what happens, what has already happened is a miracle; a miracle that began with a prayer to St. Jude, saint of the impossible.
Posted by Woodeene at 1:11 PM No comments:

The Slow Work of God 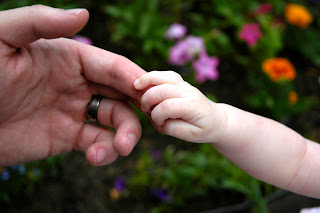 Above all, trust in the slow work of God.
We are quite naturally impatient in everything
to reach the end without delay.
We should like to skip the intermediate stages.
We are impatient of being on the way to something
unknown, something new.
And yet it is the law of all progress
that it is made by passing through
some stages of instability—
and that it may take a very long time.

And so I think it is with you;
your ideas mature gradually—let them grow,
let them shape themselves, without undue haste.
Don’t try to force them on,
as though you could be today what time
(that is to say, grace and circumstances
acting on your own good will)
will make of you tomorrow.

Only God could say what this new spirit
gradually forming within you will be.
Give Our Lord the benefit of believing
that his hand is leading you,
and accept the anxiety of feeling yourself
in suspense and incomplete.

― Pierre Teilhard de Chardin
Posted by Woodeene at 9:00 AM 1 comment:

I've been dreaming about my mother every night for the past week.

It's surprising because I had only dreamed about her once in the past year of griefwalking and now I've met her, at various ages and in various locales, each night as I sleep. But then, perhaps it isn't surprising because the one year anniversary of her death is approaching and my grief counselor tells me that it is common, virtually normal, to be disturbed in a variety of ways at this juncture.

Knowing that helps, just like knowing you have enough gas in your car to make it safely to the next gas station or that there is enough clean underwear so that you don't have to do laundry right this second.  But, on the other hand, it doesn't stop the dreams, as my subconscious pulls up a melange of memory and unresolved issues, throws in a handful of thoughts of my own mortality and stirs it all with a soupcon of fear and anxiety to create a potage of renewed grief--Tear Soup.

It's tough.  In its own way, it's almost as tough as the original griefwalk. In fact, in some odd fashion, it is even harder because it is so much more viseral than I had imagined.  I had gone through the other anniversaries--my birthday, her birthday, the holidays--with waves of renewed grieving, but not this  mind-wrenching, soul-knotting, intellect-fogging, hope-draining kind of emotional paralysis that I've been experiencing for the past several days.

It doesn't help that, despite the fact I know that grief simply takes as long as it takes, I feel like I should be over this, or at least more over it than I am. I had been taking care of my mother for nearly 14 years and I certainly knew that, at age 92, the end was coming.

Maybe that's part of it. After being her caregiver for so may years, after putting life and career on a kind of hold for that long, I never truly expected it to end.  I think I assumed it would go on as it had until my own death.

Mother thought so, too. She often said that didn't want to die before me and she didn't want me to die before her. I would tell her that the only way that could be arranged would be if we would die at the same time. She would smile sort of sweetly at that, but never made a response.  Deep down, I think that's what she secretly hoped would happen.

However, her oft-expressed desire must have sunk deep into my subconscious because I dreamed last night that she was waiting for me as I came out of a doctor's office.  "We have to go," she said, as she headed out the door, indicating that I was to follow her.  I did, to a point, then stopped, in a dark, cold and half-frozen field.  Looking down I realized I was barefoot. "I can't go," I told her.  "I don't have the right shoes."

It's a few more days until the actual date of her death. Perhaps by then I will have found the right shoes to make the rest of my life, not a slog into the winter night, but a dance by starlight. I pray so.

This Sunday I am grateful for:

1. A wonderful hairdresser friend who makes me feel beautiful.
2. A pellet stove when it's frakkin' cold outside (like 28).
3. Root beer. I really like root beer, even if it's not good for me.
4. Post-it label rolls, one of the best inventions ever.
5. A flicker of hope for the future, which has been hard to come by this past year.

As for January prayers:
So far it's been 2 Yes and 13 Not Yet.
Some of the Not Yet have been on the list for nearly a year.  I keep thinking of Jesus' parable of the widow and the judge and hope that persistence in prayer really will pay off.

Posted by Woodeene at 7:18 PM No comments: