I've been toying with the thought for some time, but now felt the prompting of the Spirit and have decided to commit. (Yikes, commitment.  Yikes.)

I will be devoting the blog to meditations, ideas, thoughts, suggestions and whatever else seems appropriate during Lent.  The goal is to have an entry every day, so that you and I can journey together during this holy season.  Sundays may still just be dedicated to gratitude and prayer scorecard, but we'll see.

I think the overarching theme will be on healing--healing of griefs, healing of relationships, emotional healing, and, to some extent, physical healing. I want to explore what I've learned about healing and what I'm still learning.

Lent is a time for prayer, renewal and hope.  God knows I need all of those these year, so I hope you will join me on this journey.

Blessings on the journey.
Posted by Woodeene at 12:57 PM No comments:

Yesterday I reflected on the idea that healing was a bit like watching a flower bloom.
Today I'm thinking it's a roller-coaster.

One day, you are going up an incline, feeling like you are really making progress and thinking that perhaps in the morning, you will feel better than you have felt for weeks or months or even years.
Then the morning comes and you realize that you are plummeting down the backside, racing at heart-pounding speed through all the old familiar, unpleasant sensations.

At least that's how it's felt for me and the anxiety and fear that have accompanied me the past year or so.

It's really rather discouraging. Especially when I've been doing all the "right" things and then, without warning, the familiar sensations of racing heart, dry mouth, and ragged breath surface, adrenalin takes over and it's takes all my concentration to hold still.

I've read what seems like a hundred books and articles about quelling anxiety and while they all offer good advice, there is no sure cure. It is, as I'm coming to realize, a process involving trust and faith. Trust that it can end and faith that it will.

With Lent coming, I've been reading about the value of "offering it up," but this year, I'd rather not offer it up, meaning hang on and suffer with it, but offer it up as in give it away completely and let the Divine Physician renew and restore me from the soul out.

As I've been reflecting on healing, I am beginning to realize that healing doesn't always look like what we think it should. For one thing, as I mentioned before, it isn't always instantaneous. I'm beginning to suspect that Voila! healings are quite rare.  Not that they can't or don't happen, but it seems like most healing is a process...a sort of unfolding.


It sort of reminds me of the way a flower blooms. While there are some flowers that pop open overnight, most of the time, it's difficult to point to the precise moment when a flower has bloomed. From bud to blossom is a process, one that we can see only with time lapse photography. But even as we view it, there really isn't a single frame that we can highlight and say, "Yes, here is where the flower bloomed."

Perhaps that is how it is with healing, especially our emotional wounds. One day, things are just a bit brighter or clearer or safer. One day, it's afternoon and I realize that I haven't felt that awful surge of panic for several hours. I can't say that I am healed, but I begin to see that healing is possible and that perhaps the process is underway.

However, that requires trust...trust that healing is possible and the trust that is happening even without tangible evidence.  Sort of like a flower that is still in the bud, I need to trust that there will be bloom.

Posted by Woodeene at 4:16 PM No comments:

More on Healing and Prayer

Last night I received some painful news from a friend. Her husband has been battling cancer for several months and everyone had been hopeful that the last round of chemo had been successful. Sadly, tests show that it had no effect on the cancer and the growths that had been surgically removed were returning with a vengeance. They had been very hopeful...and yes, faith-filled...that he had been cured.  But he wasn't.

With this coming on the heels of learning of another friend's death from the same kind of cancer, I was sick at heart this morning. What's the use of prayer, I wondered, if it has no effect? And, of course, being selfish and self-centered as we all are, I thought about my own prayers that I might be healed of the panic and anxiety that have followed me this past year like a starving wolf trails a wounded rabbit.

What if all my prayers have been words cast into a vast emptiness, pointless yammering, that does no good?  That thought alone was enough to push me into a state of heightened anxiety!

That's when I went back over my Prayer Score Cards. While there have been quite a few "no's," and there are many "not yet's" on my scorecard, there also have been a number of  "yeses." More "yeses" than "no's" actually.  One of the major ones was the restoration of a relationship that I had believed was destroyed for life.  I had spent many hours in prayer about it and, miraculously, it has been healed.

Now healing a relationship and healing an illness aren't exactly the same thing. For one, it feels like the ability to heal a relationship lies with me and the other person, while healing an illness is external and isn't something I can influence or control. However, when you don't know where the person is, you haven't spoken in nearly a decade, and you don't have any idea how to find them, going from there to a second chance is pretty darn close to miraculous.

Which brings me back to healing and prayer. When I don't get the Voila! healing, the instant cure, I feel like the answer is "NO!!!" and I stop praying. But in the case of the relationship, I prayed for years.  Literal years. With no sign whatsoever. I don't even think that I had faith that the relationship could be healed. I just prayed and kept on praying. Then, it seems so sudden, the door opened and everything changed, seemingly overnight.

A year of prayer about anything...anxiety, cancer, relationship...feels like a long time. It's very tempting...VERY TEMPTING...to decide the answer was "not for you," and give up. So I've been wondering how often persistence, as well as faith, may sometimes be required when we are asking for something that is very important to us. Maybe we need to just keep knocking on that door until it finally opens.

And, as I reminded God this morning, we don't read in Scripture that ten lepers approached Jesus and he healed none of them. Or that a father asked for healing for his son and he didn't get it. I pointed out, lest God be unaware, that it does a whole lot more for faith for a prayer to be answered than for one to be denied.

Of course, at some point, I may have to face the reality that healing isn't going to happen, but perhaps if I reach that point after much persistent prayer, I will be able to accept the "no." Until then, I will pray for my friend's husband and for myself as we continue on the journey.

Posted by Woodeene at 1:06 PM No comments:

One of the insights that has come to me is our assumption that for healing to be miraculous, it has to be instantaneous. A prayer, an anointing and Voila! The cure is complete. It's how we tend to assume all of Jesus' miracle cures happened.

While many of his cures did seem to occur at the speed of the spoken word, others didn't. Take the story of the blind man who first saw men like trees. Jesus had to apply the mud pack a second time before his sight wasfully  restored. And then there are the 10 lepers who were cured somewhere on their journey to see the priest. We don't know how long it took for their healing to show up, but clearly it wasn't right away.

As I've said before, since my mother died, I've battled anxiety and panic on a near-daily basis. I've done all the "right" things, all the medical and psychological things one does to combat these problems. I have also prayed until I feel like I've battered the gates of heaven as well as had the anointing of the sick. While I am gradually feeling more like myself, there are days, like today, when for no good reason that I can discern, the sensations well up and I feel like a deer caught in the headlights of life. And the headlights are attached to a semi going 75 miles an hour down a one-lane road.

I have an acquaintance who has been involved in healing prayer and ministry for several years. We prayed together about my anxiety and afterward he said to me, "healing itself is a journey...remember that there is still part of the road left to journey on."  Then he added, "the reality(is)  that healing is possible and Jesus longs to pour that healing out on your life."

I've been pondering his words as I've been reflecting on how Jesus cured. I don't claim to have the answer to why we are sometimes healed and why we are sometimes left in our illnesses. Much better minds than mine have grappled with that question. But it has come to my thoughts that our belief, our faith plays a role, perhaps even an essential one, in how we experience healing. Believing that we are being healed isn't any guarantee that we are being healing. But doubting that healing can take place seems to effectively block any possible healing.

So I ask myself, do I believe that the combination of medicine, psychology and faith can really remove the burden of panic? Do I truly believe that healing is possible? Do I actually think that Jesus wants to pour healing on my life.

"Lord, I believe.  Help my unbelief."
Posted by Woodeene at 3:17 PM No comments:

This Sunday in February, I am grateful for:


1. Someone to watch the cats aka the Royal Pair when I have to take a short trip later in the month. As you can see, they are a bit of a, um, challenge. 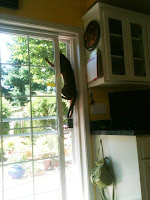 2. For a bouquet of flowers that I allowed myself to splurge on at the market.
3. For extra-soft kleenix during an allergy attack
4. A night's sleep without griefwalking dreams
5. The prayers of a healing friend.

As for the Prayer Scorecard:

Like January itself, it was a month of silence. I think the fields of my prayers were lying fallow. I am hoping that, just as I am beginning to see hints of buds on the trees and the promise that spring is coming, that some of my prayers, which have been on the list for a year, will begin to find blossoming answers.

But for now, it's:
3 Yes, including a good medical report, an easy repair to a complex problem, and a simple solution to a medication change.
11 Not Yet, including the return of stolen property, financial concerns, and a broken printer that is supposed to have been fixed but is still awaiting the right part.
0 No

Posted by Woodeene at 1:45 PM No comments: