Since we are already into March, I thought I should give my February Prayer Scorecard report.

I've observed a couple of things in the nearly a year that I've been doing this that seem relevant.

1. There are always more "yes" than "no" answers in a month.
2. There are always more "not yet" or "unclear" than either "yes" or "no" or even the two combined.
3. Often the "yes" isn't instantly recognizable. It seems to take time to unfold. And sometimes, along the way, it gets modified so that the original prayer might be answered "no," but the evolved prayer is answered "yes."

For instance, over the past nine months, a relationship has been gradually healing. It isn't completely healed yet and there are still many unresolved issues, so I can't say  that the healing has occurred 100 %. However, it's not really in the "not yet" category either.

In addition, what I started out praying for in terms of healing has changed as well. At first it was merely restored contact; now it means something more.

So, as I move into March, I'm moving those 10 "not yet" prayers along, with the hopes that at least a few of them will move into the "yes" or even "no" category.

Back before my Lent fell apart, I had been spending some time thinking about prayer, healing, and how it unfolds in our lives. Last night, when I couldn't sleep, my mind turned to the topic again.

I think, most of the time, when we pray for healing, we are really praying for a cure, and there is a difference between healing and curing. A cure removes, eliminates, eradicates the illness or problem. The tumor disappears, the depression is lifted, the blood tests return to normal. It is as if whatever was is no longer. We are cured.

This is what we see in the Gospels. Jesus goes among the people curing their illnesses. They get well. It's the same sort of thing that is required for a miracle for saint's canonization. A cure.

But healing, ah, that's a horse of different color as the Wizard of Oz says. Healing doesn't always entail a cure. Of course, it sometimes does, and that's what we are always hoping for, but often there is no cure involved.

In the past couple of days, I've read two accounts of people who believed they were cured. In both cases, which involved cancer, the tests indicated the disease had been conquered and in both cases, less than a month later, the cancer returned with a vengeance and the individual died within a few days.

My first thought was what a cruel trick God had played.  Letting someone thing they were cured and then ZAP, taking them down like a target in a video game.  To be honest, I still sort of feel that way even now. If the disease wasn't going to be cured, why have the tests come back normal? It really doesn't seem fair.

But the other side of the story is that in both cases, the individuals, on their deathbeds, asserted beyond any doubt that they had been healed.  Not cured. Healed.  They said they were now complete, whole, restored to the person God had created them to be. And because they were healed, it didn't matter that they weren't cured.

I'm grappling with this distinction as I continue to battle panic and anxiety. Could I say that I was healed if I continue to wake up in a cold sweat, heart racing and breath ragging all the rest of my life? Even if I felt like I was the person God created me to be?

It would be lovely and pious to say "Oh yes, I would rejoice that I had been healed even though I'm still breathing in paper bags on a regular basis to quell the hyperventilation" but that would be a lovely, pious lie. At least right now it would.

It's clear that we don't get to choose between healing and curing. I'm pretty sure that most of us would choose a cure because it means that whatever is causing us pain and suffering will be eliminated. Choosing healing, on the other hand, may mean that we will continue to suffer, even as the deeper parts of our soul are being restored.

I don't mean to imply that it's always a choice between cure and healing. Obviously people get both. And I'm just selfish enough that I want both. And I'd like them sooner rather than later.  I'm just not sure that God agrees!

A Lenten Failure and a Pope's Retirement

I had such high hopes for writing about my journey of Lent this year and what happened?
Well, life seems to have happened. Messy, snarled up, unpredictable life. And all my best-laid plans have gone down the proverbial drain.

Being a good Catholic, I am racked with guilt about my failure...coming so soon in Lent. It doesn't help when I read the profound musings of fellow bloggers and thing, "How do they do that???"

But one of the hallmarks of faith is to get up when you fall down.  So today I'm getting up again and thinking about Lent, and popes, and spring, and prayers.

For the past few years, life itself has provided me with more Lent than Easter. I can remember years when I looked forward to the self-imposed disciplines of fasting and giving something up. Now, in a season of my life when having to give things up -- like dreams that will never come to fruition, hopes that have been dashed forever, paths that can never be walked-- additional Lenten discipline feels superfluous.

In the midst of this, my Lenten failure, came the news that Pope Benedict was resigning, retiring to a life of prayer. Like many people, I didn't know that retirement was an option for a pope. I thought it was a bit like parenthood--you don't get to give up until the day you die and even then, I'm not so sure. 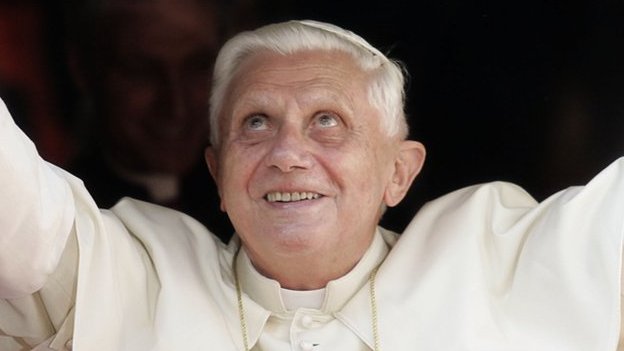 As I pondered the pope's retirement--and my Lenten failure--the thought suddenly came to me that perhaps it wasn't so much that he was retiring as he was starting over. He was giving up (willingly or unwillingly depending on which story of corruption and scandal in the Vatican you read) one chapter of his life to begin another one. "Even at his age, rebooting a life is possible, " I thought. "Until one draws one's final breath, there is always time to begin again."

As I pick up the pieces of Lent, it's a most comforting thought.
Posted by Woodeene at 4:17 PM 6 comments: