A reflection from my book Facing Adversity with Grace which will be coming out June 1.

When I began writing this book, I was looking for answers to some of my own deepest questions. It’s often that way with my writing. I am seeking as much to learn as to teach; to explore as much as to explain. Many times I find that when I reach the end of a book I have answered the questions I posed to myself at the beginning—in this case “Why do we have to suffer?” “What’s the point of suffering?” “Does God want us to suffer?” I wish I could say that I found all the answers I was seeking, but as I finish writing about saints and how they coped with their suffering, I still find myself, despite myself, wondering why we have to suffer at all....
On the one hand, I know intellectually that uniting my suffering with that of Christ has a salvific effect on creation and I accept that. In the Spiritual Exercises, St. Ignatius of Loyola explains that “Jesus says ‘I want to overcome all diseases, all poverty, all ignorance, all oppression and slavery – in short all the evils which beset humankind.’” Since he said he came to bring abundant life, that has to be true. However, it is only through us and our work that this can be accomplished. If you believe, as I do, that we must be the transformation we hope to affect, then Colossians 1:24[1], which John Paul quotes at the beginning of Salvifici Doloris, has profound implications. As I said in the first chapter, I trust it is up to us to renew the earth and transform humanity. As I understand it, when we cooperate with the Divine in our suffering, we are transformed (hopefully for the better!) and through our transformation, we become a means of change for others as well. In becoming a new creation, we open the way to creating a new heaven and new earth. In the end, if we don’t do it, no one will.
Now I really do believe this, and when I’m feeling spiritually magnanimous I ponder such things (and even write about them), but when I’m really hurting, with the kind of pain that penetrates body and soul, all I want is for the pain to go away—sooner rather than later.
That’s why I was so moved by Pope Benedict XVI’s response to the young Japanese girl that I referenced in the first chapter. Her question was simple—Why do I have to suffer? The Pope didn’t respond with a complicated treatise on the historical roots of suffering or how it relates to salvation. He didn’t quote Scripture or even his predecessor. He simply said:
I also have the same questions: why is it this way? Why do you have to suffer so much while others live in ease? And we do not have the answers but we know that Jesus suffered as you do, an innocent, and that the true God who is revealed in Jesus is by your side. This seems very important to me, even if we do not have answers, even if we are still sad…”[2]

[1] I am now rejoicing in my sufferings for your sake, and in my flesh I am completing what is lacking in Christ’s afflictions for the sake of his body, that is, the church.”
[2] http://www.catholicnewsagency.com/news/in-historic-tv-qa-pope-benedict-speaks-about-suffering-comatose-persons-persecution/
Posted by Woodeene at 8:42 PM No comments:

The month of keeping track of prayer is almost over, so I'm looking at the list and thinking that perhaps I will do this again next month, especially since several of the big things I've been praying about don't have any indication of an answer.

9 Yes. These have included things like meeting a deadline easily, a friend finding work, a tooth problem turning out not to be serious, as well as having relief from grief and anxiety for a few hours and even for one entire day.  They also included asking for a surprise and getting two very unpleasant ones in the same day.  Technically, that was a "yes" to the prayer but the answer sucked.  They also contain a partial "yes" to a problem.  The problem wasn't solved, but the financial aspect of solving it was put off for another month. So, nine prayers have had a clear "yes" as the response.

3 No.  Flat out, straight out "no."  Both had to do with healing, a prayer that I have been praying for a long time, but I had asked again, specially, and again the answer was clearly "no." No question. As strong a "no" as if a door had been slammed shut.

4 Unclear. These are things that I've been looking for an answer and there seems to have been some change in the situations, but I can't tell if the movement is toward a "yes" or a "no." These mostly have to do with relationships with other people where things have changed, but what the change means and how that might relate to my prayer just isn't clear yet. One of these is leaning so far to the "no" that it almost topples over, but since it isn't an absolute NO! yet, I'm keeping it on the unclear list.

8 Unanswered. Now granted these tend to be rather major things, along the lines of learning life's purpose and resolution of the theft that I mentioned yesterday, so I guess I have to be patient. But because so many of these "big" prayers show no sign at all of any answer, I think I'm going to transfer them to June and see what happens.

I find the results so far to be intriguing.  The "yeses" have been for things that haven't exactly been life-changing, but more "daily bread for life's journey." The "noes"--well, I don't know if my lack of faith that there could be a yes has played into it or not.  But statistically speaking, they are fewer than any other category.

The unclear are a bit puzzling.  Both because they are unclear and because I don't quite know what to do with them: should keep praying, accept the unclarity as a form of "no" or just what?

Finally, the unanswered are just that...unanswered. No sign. No hint.  No clarity.  So the lesson here may be persistence in the prayer, until, at some point, there is a clear cut "yes" or "no" answer. I can say that if the answer to these is a "yes," all the glory and honor will have to go to God because these are not things that I can do anything about on my own.  I can't affect any movement, change or resolution in any of them, which is one reason I'm going to keep praying. Either way these go, their answer has to come from God.

When the month is over, I'll give the final update, but given that we are so close to the end, I'm not really expected a lot of change. Unless, of course, I add another prayer and get an answer before the 31st. Or unless God works a May miracle!

Sunday and time to consider what I am grateful for. 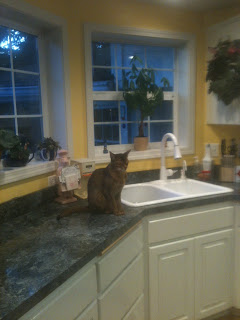 1.  A clean counter.  Now this might not seem like a big deal to you, but I'm not the world's best at keeping counters clean so this is something to be thankful about. Cat on counter doesn't count.

2. The garage door opener acted up, but after a prayer to St. Joseph and a quick consult of the manual, it's working again.

3. The ability to look at some of the many things in my life, ascertain if they are things that make me feel good and happy or not and get rid of some that had unhappy memories. Not a lot, but a few.  For a hoarder by nature, this is good progress.

4. Basti, who doesn't try to go outside, barf on the rug, eat the flowers or dig in the garbage.  She just purrs...and cuddles now and then.

5. For time spent in meditation and prayer with an increased clarity about what I did wrong in the past and a resolve to do better in the future. 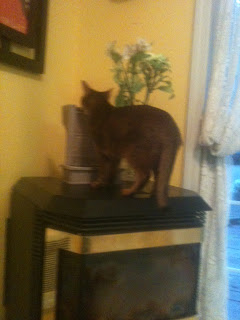 Oops.  I spoke too soon. Apparently Basti thinks the fountain is a cat watering station.

Posted by Woodeene at 8:02 PM No comments: