If some King of the earth have so large an extent of Dominion, in North, and South, as that he hath Winter and Summer together in his Dominions,

so large an extent East and West, as that he hath day and night together in his Dominions, much more hath God mercy and judgement together: He brought light out of darknesse, not out of a lesser light; he can bring thy Summer out of Winter, though thou have no Spring; though in the wayes of fortune, or understanding, or conscience, thou have been benighted till now, wintred and frozen, clouded and eclypsed, damped and benummed, smothered and stupefied till now, now God comes to thee, not as in the dawning of the day, not as in the bud of the spring, but as the Sun at noon to illustrate all shadowes, as the sheaves in harvest, to fill all penuries, all occasions invite his mercies, and all times are his seasons—John Donne
Posted by Woodeene at 7:28 PM No comments:

I've been an orphan for two weeks now.  I realize that's an odd way to express it, especially at my age, that is the reality. Two weeks ago, at 4:14 am, the world as I knew it altered forever.

These past two weeks have been filled with a lot of sadness, but also some small surprises. Maybe, because there is so much heaviness in my life right now, I am savoring the small bits all that much more. 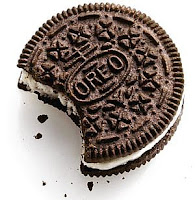 Like last night.  I was having a massive craving for chocolate, but there wasn't anything in the house and I up to going out.  On a whim I opened the cookie jar, which never contains cookies and LO!!!  There were four, count them, four OREOS!!  I don't know exactly how long they'd been there, but they tasted just fine as I snorfed them down.

Just a small surprise in the midst of dark days.


(And while I'm talking about dark days, I have a friend who is experiencing some huge issues with his business and another whose mother has just been diagnosed with inoperable lung cancer.  So to those who find and read this blog, a few prayers, good thoughts and positive energy sent their way would be most welcome.) Did you know that your 11th and 12th ribs can "float" up under your 10th causing a great deal of pain that can mimic a heart attack or gall bladder?

Well, neither did I.  But now I do.  I was fairly sure I wasn't having a heart attack when I went to the doctor, but I was thinking of dire things like liver cancer, gall bladder etc.  But apparently it's "just" a rib floating out of place.

I have a great many things floating through my mind right now and apparently my rib wanted to get in on the action.

And so I leave you with this passage from my upcoming book on suffering, Facing Adversity with Grace:


When you are able to see your suffering in the light of life’s greater purpose, your suffering becomes redemptive rather than destructive. As long as you believe your suffering is without merit, it will do nothing for your spiritual growth. It is only when you realize that physical suffering can become a means to holiness that it can be transformed from mere pain into peaceful acceptance....

, in the words of the great poet Kahil Gibran, “Your pain… is the bitter potion by which the physician within you heals your sick self. Therefore trust the physician and drink his remedy in silence and tranquility. For his hand, though heavy and hard, is guided by the tender hand of the Unseen.”

Posted by Woodeene at 7:00 AM No comments:

I have a small meditation chapel in my house.  It doesn't have any light other than a skylight and candles (I'll take a picture in the day and post it later) so the night is clear and close.  Last night I stood outside the door, which has a temple bell hanging before it, thinking about all the changes that have suddenly been thrust upon me.

My mother's death certainly tops the list.  But just a few days before she died, I took a temporary job at a debt collection company to help both with some of the finances and to get my focus off caregiving for a little while.  Little did I know that the job would be taking my mind off grief for a few hours each day since I started on Monday, the one week anniversary of the funeral.

I'm not quite sure why I found and took this job...or perhaps was lead and given it.  It certainly isn't anything I've ever done or aspired to do.  However, I firmly believe, even when I am in the midst of doubting everything including my sanity and the presence of God, that all things happen in our lives for a reason.  That everything comes with a lesson attached.  Sometimes the lesson is learned in joy, sometimes in sorrow.  Sometimes in difficulty, sometimes in ease.

Lately my lessons seem to be learned more in sorrow and difficulty than in ease.  Perhaps that's because I don't pay sufficient attention to the lessons of joy and ease.  Or perhaps it is because I am sending out signals that indicate I want to learn the hard way.  After all, it says in Job that "What I always feared has happened to me. What I dreaded has come true."  It does seem that what we focus on comes to pass and certainly this past year my focus has been on hard things.

As I enter the meditation chapel on my way to bed, I look up through the skylight and see the full moon overhead, a silver bowl in a star-spangled sky.  I can see why the ancients thought the moon was a goddess, draping her soft shimmering light over the land, transforming the harshness into gentle shadow and flowing shape.

Perhaps, starting now, I can begin to learn some lessons from a place of joy, instead of pain.

It's the prayer I send to heaven on a moonbeam during this full moon.

Today is the one week anniversary of my mother's funeral.  I had great plans to do many things yesterday. But the best laid plans went aglee as Robert Burns wrote and instead I just took the the time to breathe my way into the night.

I am shocked at how grief creeps in on strange little paws.  Like yesterday.  It was the first Sunday in 12 years that I haven't visited Mother (unless I was out of town or ill) and the void is palpable.  Even going to a friend's and watching the Superbowl didn't fully shift the feelings, although it did help.

I know that the only way out is through.

But a hot bath didn't hurt.
Posted by Woodeene at 7:00 AM No comments:

Because I am an only child, my mother's death is a solitary event for me. There are no siblings to share memories with and while my son remembers his grandmother, she was one generation removed and therefore his grief is, understandably, different. I still have two aunts who live in another town, but they, too, are experiencing the death on a different level--that of their sister.

A week ago, I was preparing for a funeral, making a plenitude of decisions and careening into tears at the flicker of a memory.  Today I haven't cried...yet...although the pervasive sense of unreality, of griefwalking continues.

A year ago my mother fell and broke both legs. At the time she was expected to die, but she didn't and her last year gave me a chance to create some closure, work out some issues and prepare myself, as best as we can, for the final departure.

So what is echoing in my heart right now is this song from Rent (which isn't my favorite musical by a long shot!)--How do you measure a year?

Posted by Woodeene at 7:00 AM No comments: